View our blog for recipes and tips!!! View Now
A 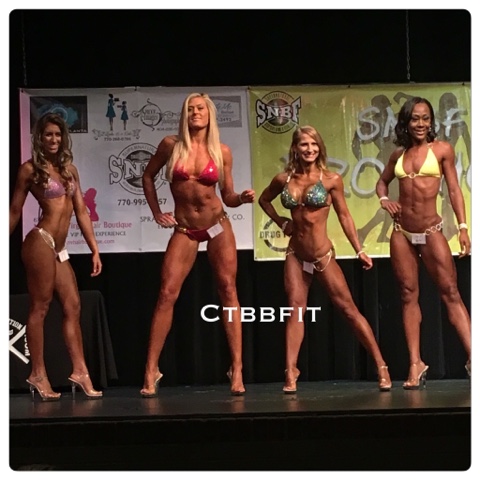 (6 months post-partum on the SNBF Pro Stage)
Warning: You are about to read my
experience with breastfeeding and competition prep. I am going to be brutally
honest because I feel like A) someone needs to do it and B) so many women have
reached out to me about losing weight after a baby. So here it goes. You have
been warned- there will be lots of post partum details.
The Journey
Before
having a baby, the plan was to compete in my first pro show as motivation to
drop the baby weight. I gained 36 lbs. total with 10 lbs. of it happening in
the last 3 weeks due to fluid retention and the version I had at 38 weeks.
Although I was back down to pre-pregnancy weight about three weeks after I had
my son, I didn’t look like my former pre-preggo self. I was mushy and soft and
wanted to tighten things up. My love of lifting got me back in the gym as soon
as I was cleared but only doing bodyweight work for quite a while before I was
brave enough to add weight. When you have an episiotomy the last thing you want
to do is go running into the gym trying to do heavy squats or lunges. I had to
have my inner band cut and I still managed to tear so needless to say I had to
focus on healing and pelvic floor exercises. I used a program from Brooke at http://thebloommethod.com/ during my
pregnancy and post partum and I swear that the program coupled with my active
pregnancy is the reason I was able to bounce back so quickly.
I
worked for a couple of months on my own tweaking macros and training and then
hired a coach- yes, even coaches hire coaches because everyone is guilty of
being their own worst critic. The training she had
me doing was amazing and I was able to build muscle by doing
completely different training than I was use to. If I had given myself more
time, I am sure I would have put on more muscle but I wanted to compete in
April and so I did. I am not going to lie cardio was a challenge. I had a lot
of HIIT cardio sessions and there is no other way to put this but plainly- I
peed my pants a lot. Well, I didn’t pee my pants but I had to wear pads to
prevent it from happening. I couldn’t figure out why I was still having this
problem until I went back to the doctor and found out that I have a prolapsed
uterus. This was not from lack of doing kegels or other pelvic floor exercises.
It can happen from the type of episiotomy I had. No more sprinting for me lol.
Before
starting prep, I told myself that if my milk dropped at all during prep that I
would stop and call off competing. I ended up being fortunate enough to not
have a drop in my milk supply due to prep. There were only two times that I got
worried. Two weeks or so before the show, I got the stomach flu and couldn’t
keep food down and my milk supply dropped. I worked really hard adding
fenugreek and nursing like crazy to bring it back up and it took about a week-
thank goodness for the freezes stash. Close call. Then, on show day it took
another hit. This was strange to me because I didn’t water deplete or drop
calories like I would have if I weren’t breast feeding but looking back, it
makes total sense. I was exhausted, depleted of all of my energy and that made
an impact. Luckily the next day after much needed rest and some post comp
treats, it was back up.
During
my prep, I had enough calories to produce milk but had enough of a deficit to
lose body fat. My entire prep was exhausting but I was 100% determined to do
this after I had committed to it (not only committed to it, but publically
committed to it as well). I woke up at 4:30 every morning and between nursing
and packing bottles that I pumped, getting ready, working all day, two workouts
a day, etc. I was so exhausted. I would pick up my son from daycare and play
with him until it was his bedtime, then workout, then prepare his clothes,
bottles, solids, etc. for the next day. I ended up in bed around 10:30pm
each night and up at 4:30am. Mind you, my baby doesn’t sleep through the night
either so we are up at least twice, if not more, nursing so it ends up being
even less sleep. I managed for a while on pure determination. At least until
the end. During peak week, I was so exhausted that it felt hard to simply lug
my body around. That does happen on peak week because you are usually at your
weakest but I think  it was worse for me
because I am breastfeeding and all of my energy was being used to make milk. 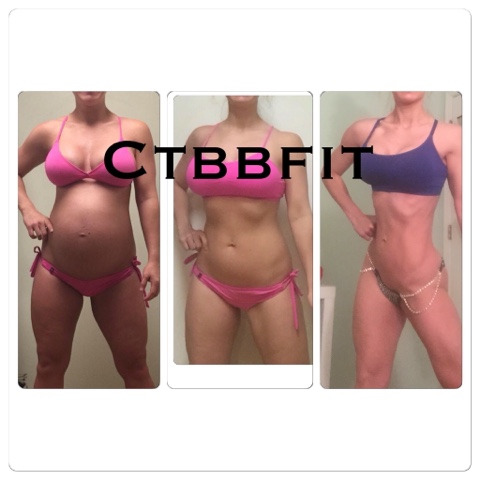 (9 months pregnant, 10 weeks post    partum, 29 weeks months postpartum)
The
day of the show, I competed at 113lbs, my lightest weight on stage so far and I
wasn’t trying to lose that much. I had far exceeded my baby weight goal and to
be honest, was ready to gain weight back immediately. I am 123-125 lbs.
off-season while staying decently lean. I usually come in at 115-116 on stage
so this was well below that but it is because I really didn’t have time to add
muscle and then lean out because of my time constraint for the show. So many people
ask me why I wanted to compete so soon after having a baby and my answer is
this- it is who I am. I love my fitness life and it is a huge part of who I was
before I had a baby and I wanted it to remain that way. I want my husband and I
to set an example for our son so that he grows up fit and healthy. I wanted to
compete because I think it is important to set goals and follow through. After
having a baby, I needed the gym as my ME time. And you know what? It worked.
Having this goal motivated me I DID IT!
The
pro class that I walked on stage with was nothing short of amazing. These girls
were stacked! I was so proud of myself that I made it to that stage I didn’t
place that day (and I honestly didn’t expect to) but that wasn’t the point. I
met my goal and competed 6 months postpartum while breastfeeding and that was
HUGE.  Most people don’t even understand
what that means. Sure, I just competed after having a baby, that part wasn’t
the toughest. I did it while breast-feeding and THAT WAS TOUGH because it
requires calories to make enough milk for the baby. It was a juggling act. All
that matters is that I did it successfully. All of these girls on stage prepped
their butts off and I, after just having a baby, stood on stage right next to
them. 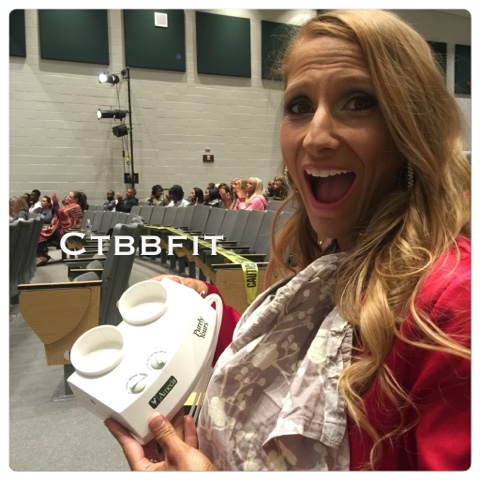 (Pumping during the meeting)

Moral
of the story-you can do whatever you set your mind to do. You don’t need a gym
to transform your body. The best part about my entire prep is that I was able
to workout in my home gym while my baby slept. Yup, you heard me. I snuck away
to my itty-bitty, tee-niney garage and squatted, deadlift, etc. so that I could
go to my baby if he woke up during my training.
Reflections
Competing
after having a baby was an incredible, but difficult, journey. After the show,
I had plenty of time to reflect and think about what I wanted to do next. This
process wasn’t just about losing weight. It was about getting fit again and
feeling great and yet here I was feeling exhausted but determined to have
better abs, more developed glutes, popping hamstrings, etc. next time. Essentially
I was picking myself apart and realized I had done this over the course of my entire
prep. I became obsessed with things that I thought were underdeveloped on my
body and compared each week’s progress to previous weeks and to previous shows.
While most women chase a certain weight, I chase a certain look. I am never
satisfied with the progress I make and I am not sure if this has more to do
with being a competitor or just being a woman in general. After seeing a post
written by a gorgeous fit friend of mine, Sandy Lee, I finally realized that I
needed to stop chasing that look and just workout to be fit and healthy. No one
can define ‘fit’ for me, which is her point in her post “Fat Genes, Skinny
Jeans.” (Go look her up-https://www.sandyleenutrition.com/). Don’t get me
wrong, the whole point of training for me is to push myself and to make
progress but I will no longer define my progress by whether or not I can see my
abs or if I am holding water (a common complaint among us ladies. I am not
genetically blessed with a great 6 pack even when I lean out. I have a
well-defined midsection at best, but I will be working with what I have now versus
trying to change it. I use to hate my legs (prior to competing) because of how thick
they are. I literally never even wore shorts. It wasn’t until I began to compete
that I started to appreciate my legs.
My journey
back to the stage 6 months post partum was a huge goal that I proudly met but I
won’t let myself pick my post-comp body apart. My abs are gone, the tan has
faded, and I am left with a body that is much more sustainable. Competition
bodies are NOT sustainable year round. All of my fitness focus will go toward
getting stronger and perfecting my lifts and doing things that make me feel
good. If I end up making gains in the process, fantastic. I am incredibly
grateful for all of the support that I received during my journey and I will
continue to live a healthy, active lifestyle for my family and to help other
women around me.
Tweet
Share
Pin1
Shares 1
« My Post Baby Body Truth
D’s Naturals Fluffbutter Review »